John Morgan, my friend and former boss, put together this video so that I could offer my recording of Virtual Massage on YouTube. YAY!  Click on the video below to hear it.

Here's the back story of how I came to write and record Virtual Massage:
My friend Lena was my first massage client here in my new home when I lived at the River House. After she left, I was on the phone to John Morgan, my boss of John Morgan Seminars fame and I said, "I wish I had another body to work on." And he said his shoulder was bothering him and what would I do to alleviate the pain. I told him I'd start with his traps and work into levator...and being the auditory person he is, he said, Tell me as if you're giving a massage in real time. So I did, without the anatomical nerd-talk. At the end of it, he said he felt better and said, "I think you have something here. Write a script." He came up with the name Virtual Massage AND did the post-production (he made my voice sound like velvet!) AND designed the CD for me. John was my willing guinea pig as we worked through the script together and he gave me advice on how to make it even better. On the final reading, he fell asleep (the ultimate success!) and I hung up the phone after I was finished. He phoned ten minutes later saying, "I think you're ready to go into the studio." High praise coming from "America's-Best-Known-Hypnotherapist."
I also wanted feedback from a fellow massage therapist, so I read it to my friend Bess. She said, "That was fantastic! I feel like I've just had a massage and a half!" High praise coming from my favourite massage therapist! The night before I went into the studio, I read it for XM Radio Guy, who has been a client for years. And he said, "That was amazing." THANK YOU!!!
I also have background music on this recording. And not just any music, but my favourite music when I'm giving a massage: Chesapeake Bay: Reflections of Beauty, by Mike Zampi. He let me use the whole CD just like I would in a massage session. So, it's been 13 years and things have changed!  But the recording still sounds fantastic. Thanks, John!
Posted by Hali Chambers at 2:14 PM 2 comments:

As a pathological writer in any book I'm reading, I very much appreciate reading other people's comments. I especially love this one:

No other book except the Bible, has made one feel so strong as this Life of Charlotte Bronte.

The 'portrait' on the other page is so hideous, that I have cut it out. 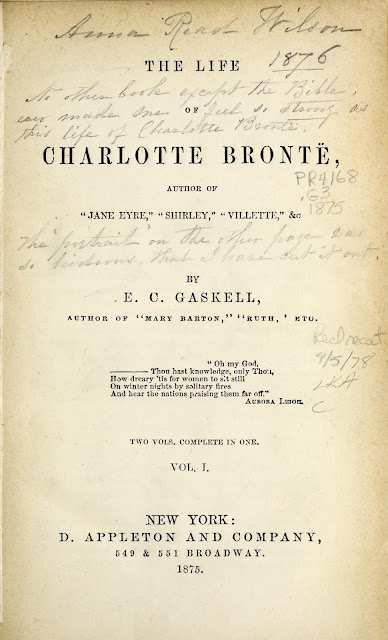 What "hideous" portrait you may wonder as I did. Found it: 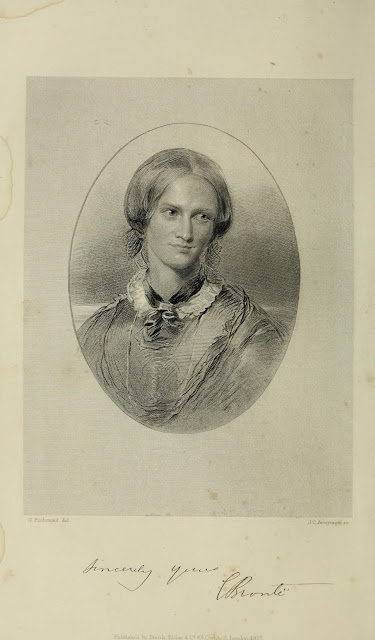 Makes me want to look at this lady's Bible.
This is what prompted my Rabbit Hole Research:
Victober!

Posted by Hali Chambers at 1:07 PM No comments:

One of my summer projects has been helping my sister Ruthie in the A&P (Anatomy & Physiology) lab at the local university.  Here are a few shots of the lab: 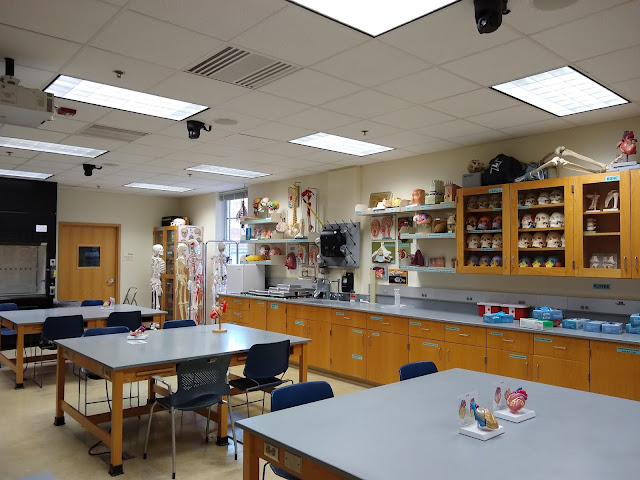 This was her project last summer; getting organized!  Mission accomplished. 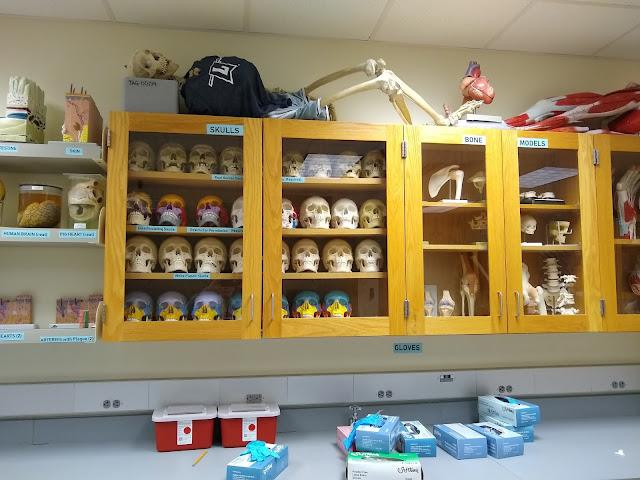 Key tenants of getting organized: Sorting like items with like items. Also, everything is labeled for easy access and communication amongst professors as well as students. 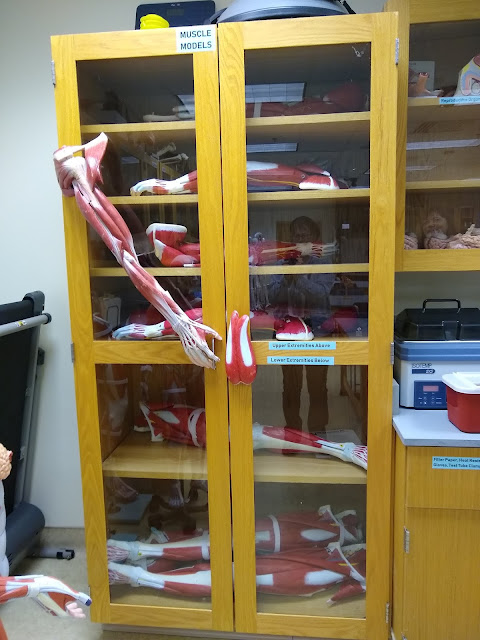 We have been getting bone boxes together for student lab practicals. The bone boxes are decades old and were in desperate need of repair, not to mention basic cleaning. Ruth scrubbed the boxes, vacuumed out bone dust, and repaired them with wood putty, glue, and those teeny-tiny nails from the hardware store. 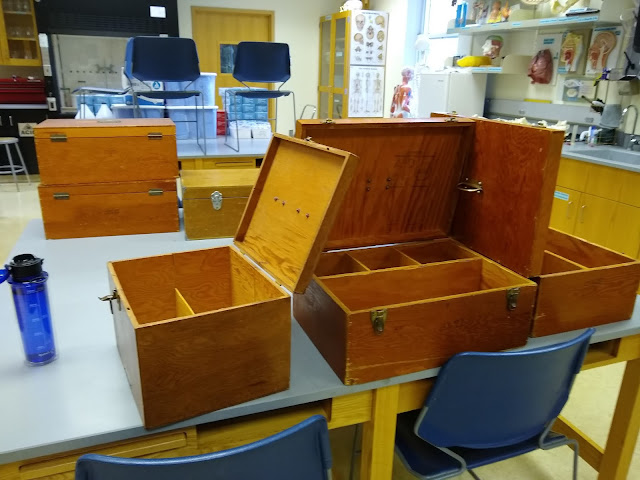 Cleaned, repaired, and ready for Part 2.
On to the bones!  There were 2 kinds: plastic and real. The plastic ones were grimy and looked like they'd never been cleaned. Ruthie soaked them in the sink and then scrubbed each one. Here's a batch drying on the rack: 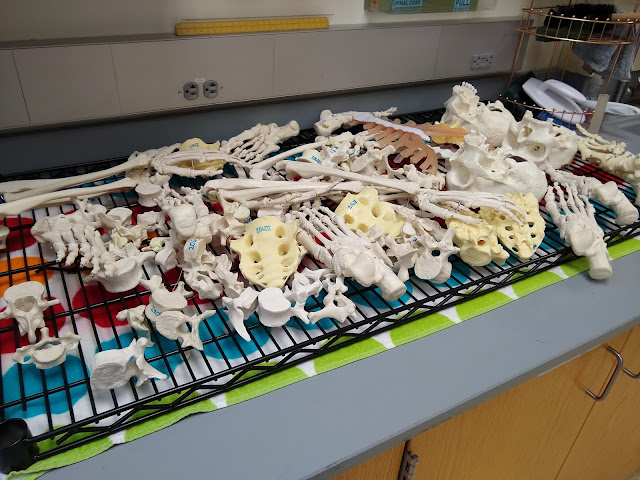 The "drying rack" is actually a shelf unit she McGyvered in The Great A&P Lab Organization of 2019.
Lookit how CLEAN and new the bones look! 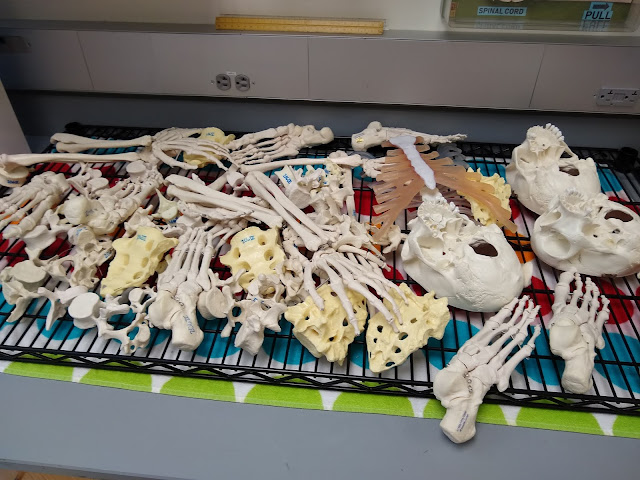 The real bones were a bit more problematic with chipping & missing pieces, like this femur: 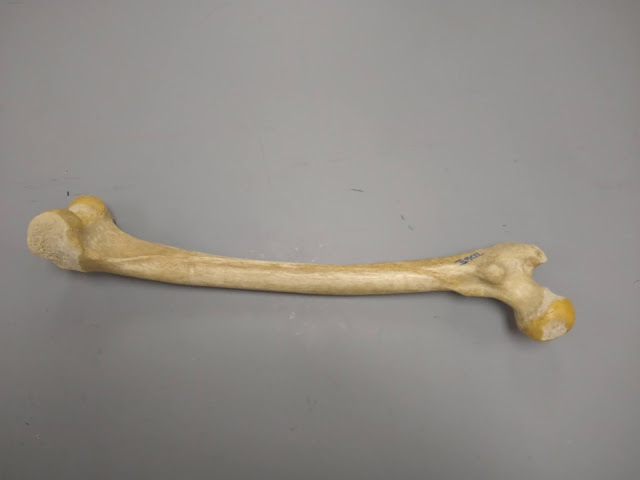 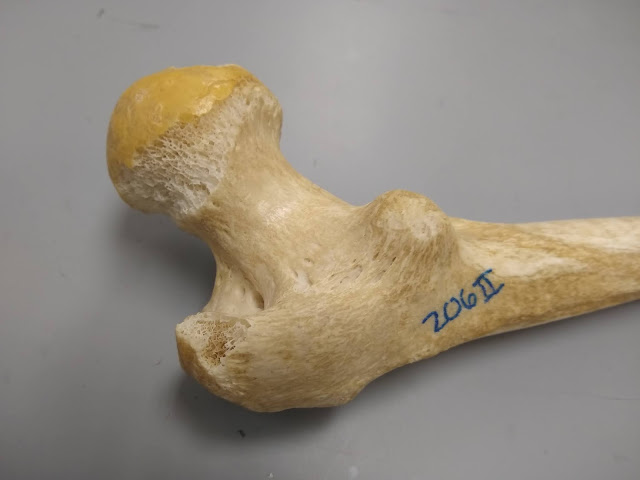 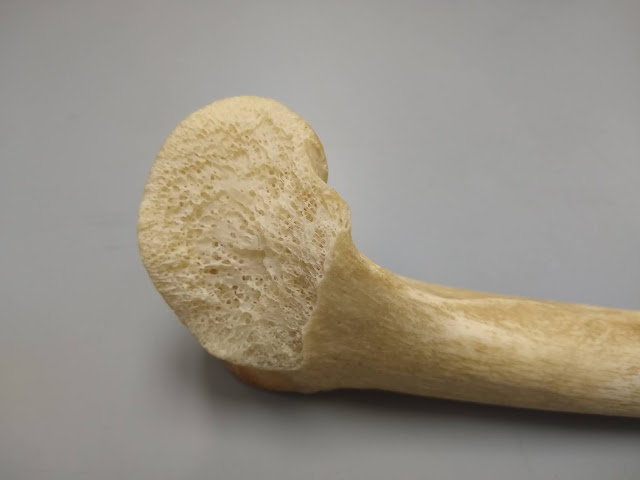 Ruth repaired with a kind of modeling clay that she molded and let harden: 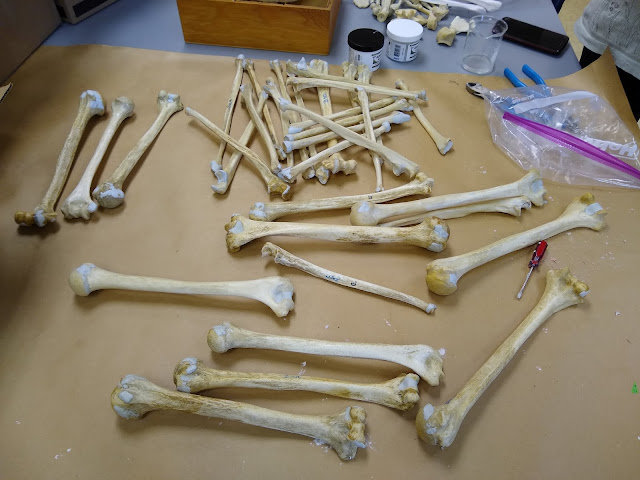 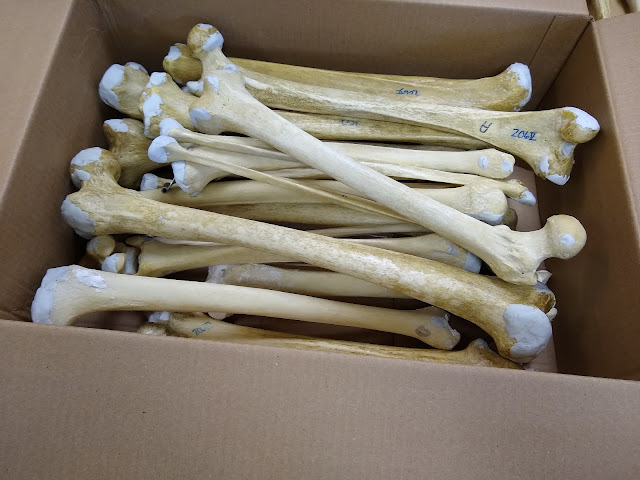 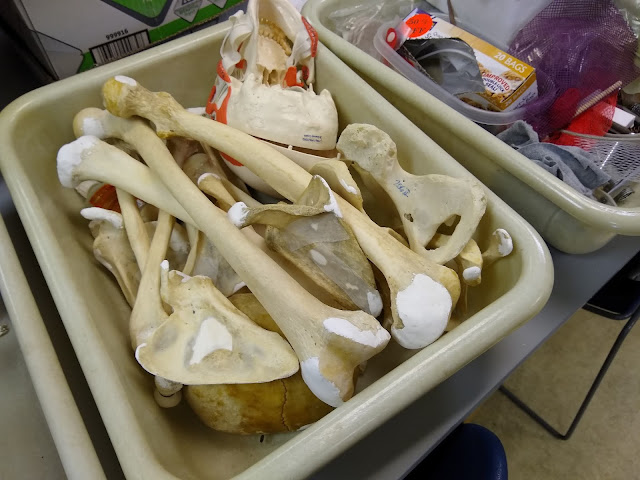 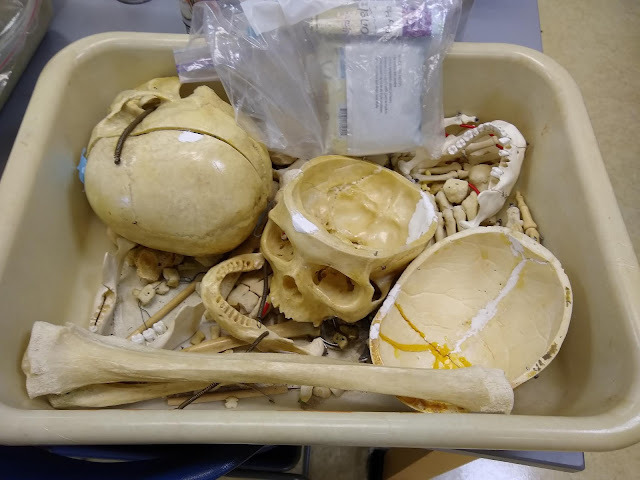 Then she had to sand and smooth where she repaired: 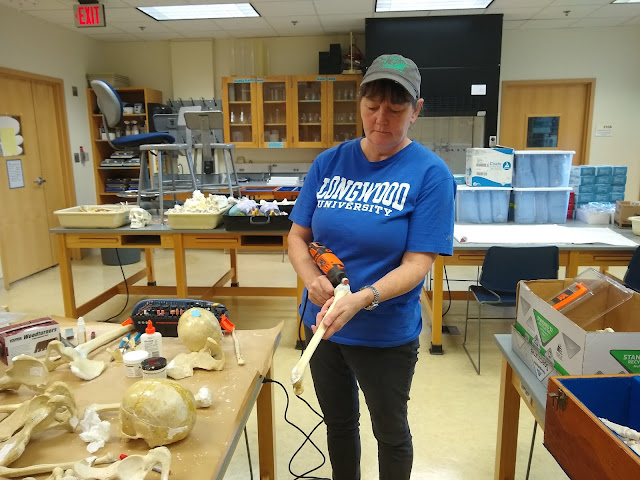 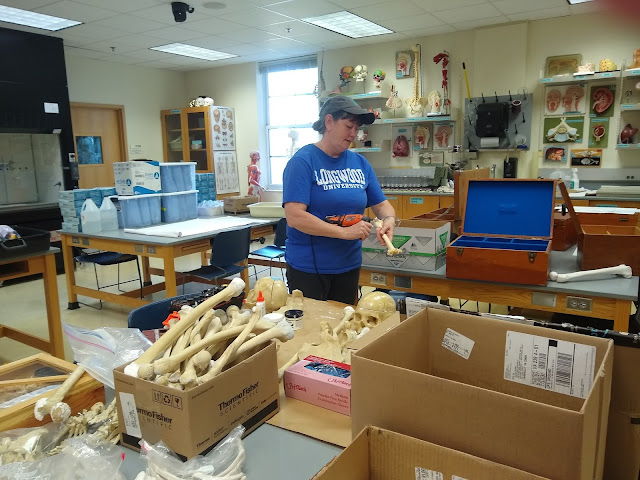 Meanwhile, I worked on the boxes: 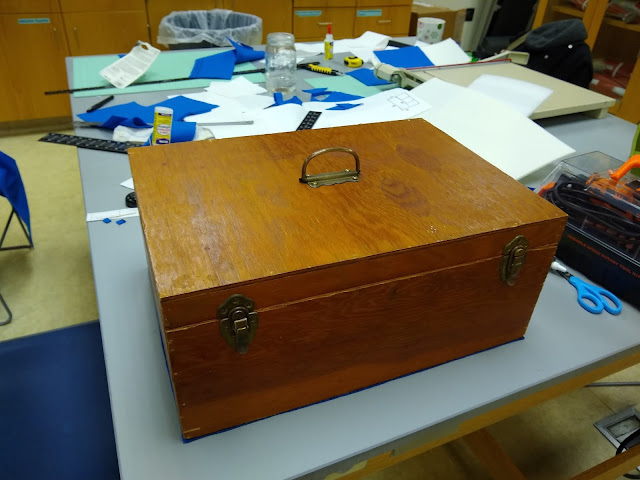 I created a template and cut out different coloured felt for each box, so that we could keep the bones organized and put in their right boxes: 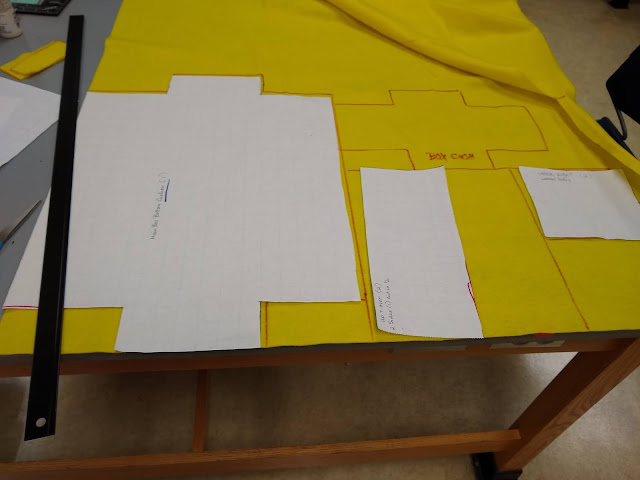 I call this colour Nuclear Yellow.
Lemme just say that the felt was difficult to work with in all its 100% polyester gloriousness; very fiddley and difficult to cut. Also, it was ordered for us by some non-creative dude, whose Kindergarten colour choices included the aforementioned nuclear yellow, as well as nuclear orange.  He also thought white would be a suitable colour.  WHITE.  (OK, artsy-snobbery rant over).
This was the first box before I changed the templates to cover over the divider bits: 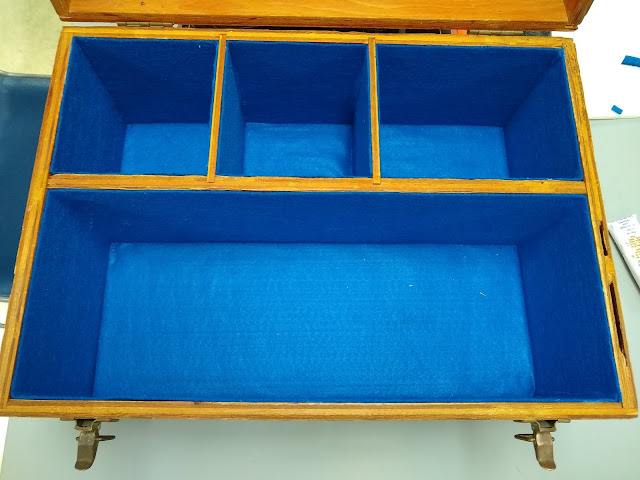 Foam cushions on bottom. The royal blue felt is really beautiful and adds a pop of colour! 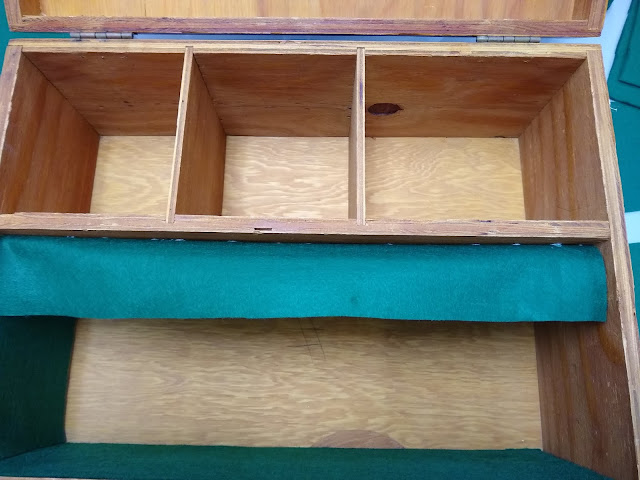 Bottom of box covered with a cushion; felt glued to all sides, as well as over divider parts.
A later box: 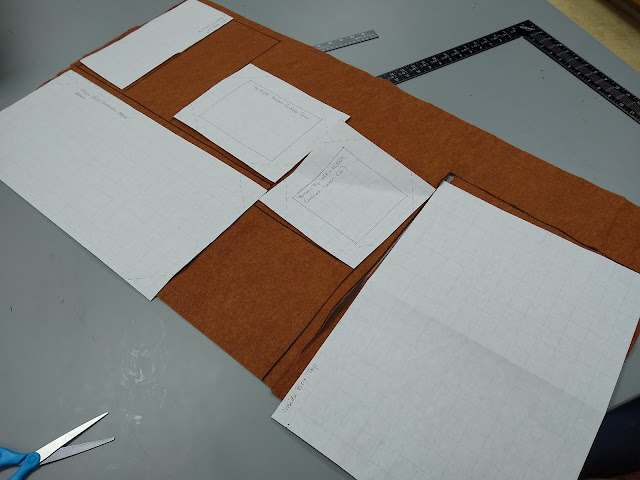 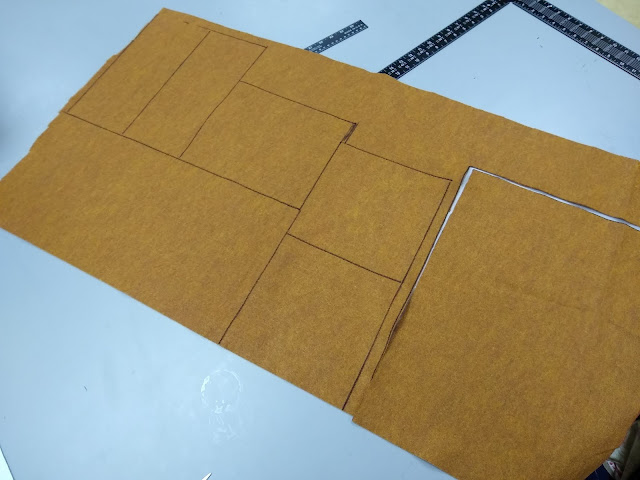 Same felt, horrible, fluorescent lighting.
After using up 3 whole bottles of Fabri-Tac, I found this at the hardware store: 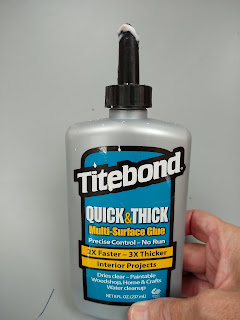 I don't know how acid-free or "archival" Titebond is, but does polyester require that level of detail?  I think not.  It worked GREAT!
Ta-da! 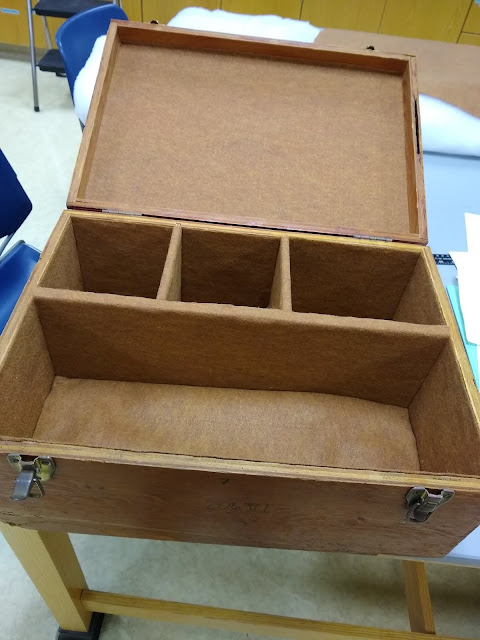 I don't know if you can tell, but I switched to batting for the bottom cushions, which was a bit more cushiony. 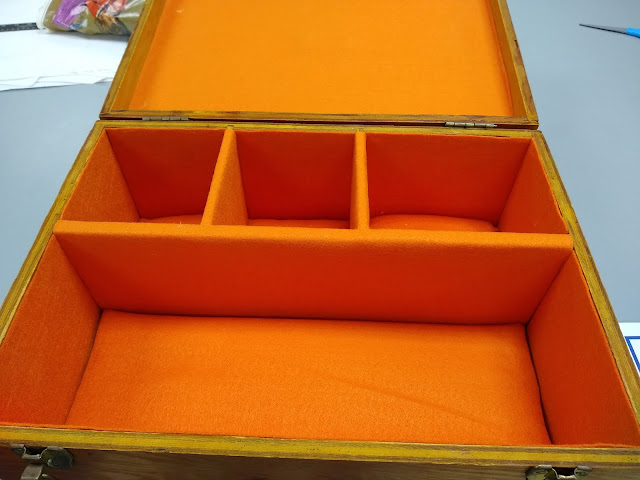 "Hullo!  I'm ORANGE!"
Candid shot in the middle of it all: 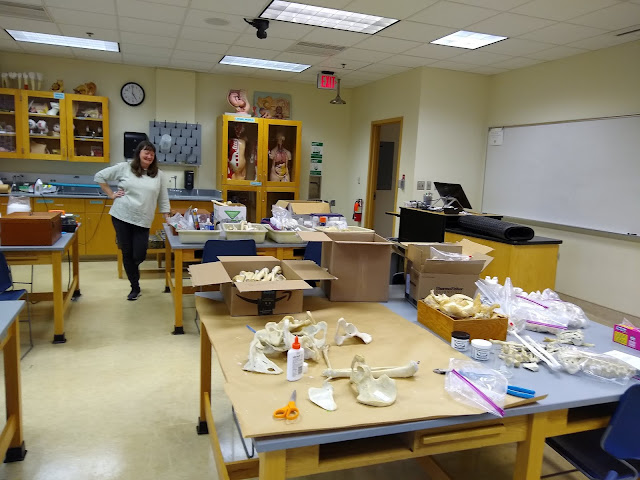 After I finished the boxes, and Ruthie had repaired all the real bones, I painted them with 3 coats of paint.And here we are, boxes all together with bones, ready to put back in the cabinet: 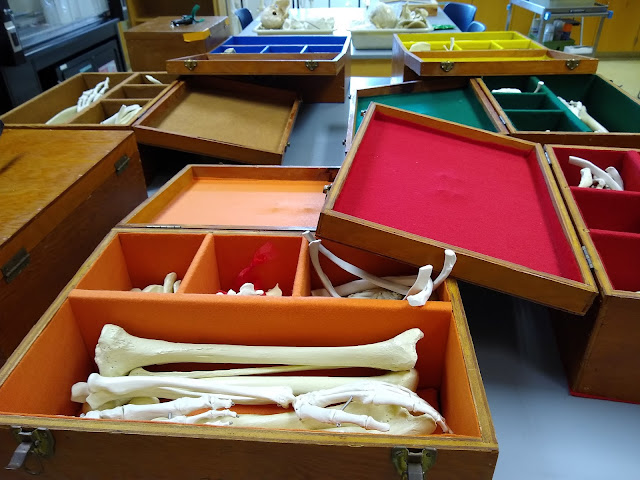 In the middle of the project, former boss and friend, John Morgan, sent me a proper lab coat for my work in the Bone Lab. You'll note the embroidery of Temperance on there, because of the show Bones that Mum and I used to watch.  :-) 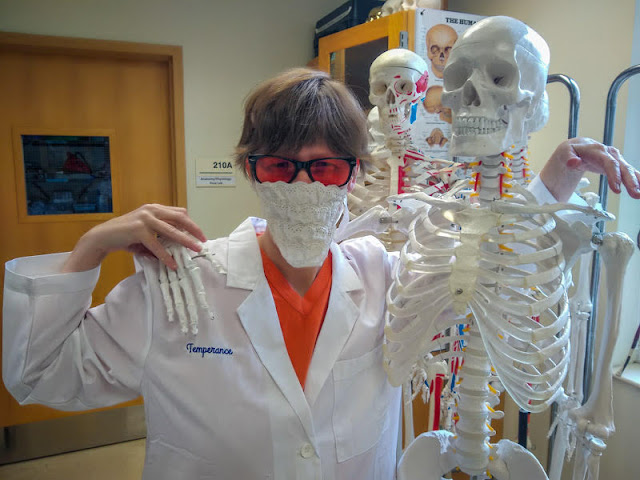 You'll also note I'm doing "hover hands" over the should of the (plastic) skeleton. Also, those are Theraspec migraine glasses I'm wearing; protection against fluorescent lighting, which is like kryptonite to my brain.

The only thing we didn't get done was to put colour-coordinated paint on each bone, so that a blue-dotted bone doesn't end up in the nuclear yellow box, etc. We're also going to add bony landmarks, insertions and origins, etc. But that can be done in Part 86 of this process. For now, we are done and done!

Posted by Hali Chambers at 10:30 AM No comments:

I finally got my studio set up to film, but the lighting in this is awful--which I've since remedied. In any case, here's a simple TN that I hacked to include my wallet and planner, all in one. I use the One Book July challenge to try different systems and see if I can simplify even more. Really loving this!

Posted by Hali Chambers at 3:52 PM No comments:

Posted by Hali Chambers at 9:15 AM No comments: